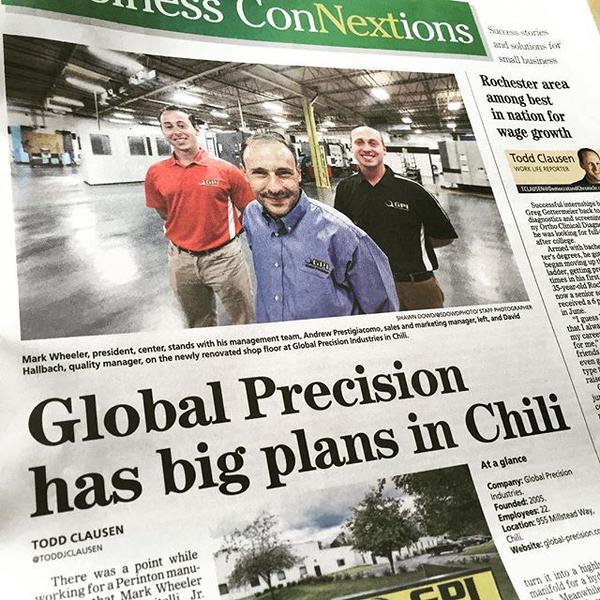 There was a point while working for a Perinton manufacturer that Mark Wheeler and Robert Nuccitelli Jr. looked at each other and thought, “We could do this.”

So 10 years ago, they cashed in what savings they had to buy large-scale production equipment and opened Global Precision Industries in a small facility on Mount Read Boulevard. They hired an employee to help out during the day while initially keeping their day jobs.

Wheeler began working for the company full-time by year three, bringing more employees and equipment on board and moving the automotive component manufacturer into a 21,000-square-foot plant on Dodge Street.

“It was this giant empty building with six machines with it and we said, ‘How are we ever going to fill it?’ ” Wheeler said. “We filled it in four years.”

Demand for various parts in the automotive service and after-markets grew, and the firm continued to add automated machining equipment and workers. Wheeler began to step back from the day-to-day, hiring Andrew Prestigiacomo, a St. John Fisher College graduate from Greece, to take over sales and marketing and making Rochester Institute of Technology graduate David Hallbach the firm’s quality manager, while adding other workers. Nuccitelli is the firm’s chief financial officer.

Even as sales began to dip, the company invested $500,000 to renovate an 80,000-square-foot plant on Millstead Way in Chili. It moved into the former home of Gillette Machine & Tool Co. last year, where 22 employees and about 20 different machines make parts shipped throughout the country and Mexico for engines made by Chrysler Group, Ford Motor Co. and others.

“Everything in this building sums up what we want to be in the future,” Prestigiacomo said.

The drop in sales showed the leadership that they needed to be become less reliant on the automotive industry, leading them to focus on producing a variety of engine components for personal watercrafts, all-terrain vehicles, tractors and locomotive engines.

The company’s smallest parts can be held by hand. Its largest weigh more than 600 pounds. It can take a 30-pound block of aluminum and turn it into a highly shined manifold for a hydrogen vehicle. Meanwhile, each part goes through on-site quality testing.

“It’s about the sheer number of customers you service,” Wheeler said. “You really need to be at 40 customers in different markets because there are no guarantees. Some customers stand up and others do not. So you have to calculate the risk on every project. You’ve got to be very creative.”

The company is projecting revenues of about $5.3 million for this fiscal year, hoping to add as many as 30 employees over the next five years by tapping new markets and creating new opportunities when it completes paperwork to be designated as a veteran-owned business. Wheeler spent six years with the U.S. Army.

“I just want to see a company that employs 100 people day in and day out,” Wheeler said. 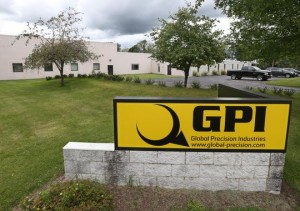 See the original story on the Democrat & Chronicle here: http://www.democratandchronicle.com/story/money/business/2015/08/28/chili-firm-has-big-plans-former-gillette-home/32290481/